Microsoft recently released the first sneak peak of their new operating system, Windows 8, and it's a pretty big departure from the last few major updates. The new Windows 8 was built from the ground up, and is designed primarily as a touchscreen interface, which is perfect for the expanding tablet market. They've ditched the clunky start screen that's dominated Windows 95 through Windows 7, replacing it with grids of application tiles, similar in functionality to an iPad or Android tablet, and even more so—the Windows Phone 7.

But how well will a touchscreen-based user interface transfer over to traditional desktop computing? It's unlikely that people will want to swipe their large desktop monitor, or even their tiny laptop screen, nor will they be likely to purchase new touch-based monitors or switch over to tablet computers specifically for Windows 8. Microsoft understands this, and that's why they didn't abandon the traditional UI altogether. Windows 8 works perfect with a keyboard and mouse.

Here's some of the new features of the touchscreen interface that Microsoft unveiled:

Microsoft may be playing catch-up with touchscreen computing, but they're doing a decent job, looking somewhat better than the future Mac OS X "Lion" update to Apple's operating system, which turns its desktop environment into an iPad-like frenzy. And Windows 8's new app store will be very similar to Google's Android Market and Apple's Mac App Store, which makes it easy for developers to create applications from day one, thanks to the fact that they can be written in HTML5 and Javascript, just like web apps. 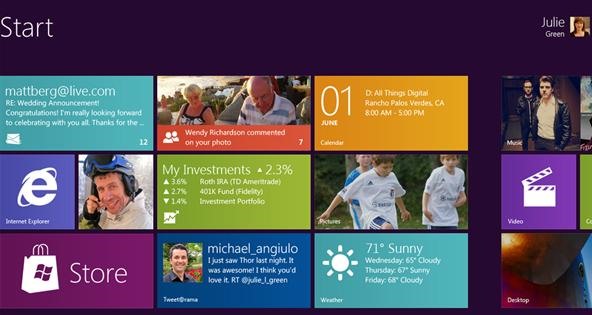 What do you think of the new Windows 8?

Want to master Microsoft Excel and take your work-from-home job prospects to the next level? Jump-start your career with our Premium A-to-Z Microsoft Excel Training Bundle from the new Gadget Hacks Shop and get lifetime access to more than 40 hours of Basic to Advanced instruction on functions, formula, tools, and more.

Other worthwhile deals to check out: